This book project includes three CDs curated by Steve Guasch of Salsaneo Records, featuring a selection of forty original salsa and Latin jazz songs from Pacific NW bands so that readers can enjoy different samples from the last forty years of salsa music in the region. Author Oswaldo Lucca wanted to document, validate and recognize all the talent and efforts of local musicians with the release of “Salsa Music In The Pacific Northwest: A Collective Memoir”.

Seattle, Washington – May 18and2022 – Author Oswaldo Lucca officially announced the launch of his highly anticipated book this week, Salsa Music in the Pacific Northwest: A Collective Memory. Her new book follows the release of Salsa Informant, a salsa dance calendar originally published in 1994. Salsa Music in the Pacific Northwest is the first of its kind, which not only brings readers into the lives of NW Pacific musicians, but showcases a wide range of talent from the salsa community and includes a wide range of musical selections from the past 40 years of salsa and from the Latin jazz.

In a recent interview, Oswaldo Lucca was quoted as saying, “I had considered this project since 1994 when I started posting Salsa informant, a local salsa calendar. This project is about tracking the evolution of local salsa music and giving a voice to the very people who were involved in creating this salsa music community in the Pacific Northwest. What started as a simple compilation of music from local bands has blossomed into a historic dedication not only to local bands but to the salsa community as a whole: dancers, DJs, venues, musicians, promoters, and more.

He went on to say, “Readers will not only learn about the musicians and talents of the salsa community, but will be able to find out more about their origins. They can also listen to the forty song selections in the three CDs that are included with the book. The selected songs were chosen by Steve Guasch of Salsaneo Records, exclusively for this project.

Learn more or buy Salsa Music in the Pacific Northwest: A Collective Memoryvisit their official website at https://www.facebook.com/salsamusicinthepacificnorthwest/.

Oswaldo Lucca, Ph.D., came to the NW Pacific from Puerto Rico in the late 1970s and went to graduate school at UW in 1981. He has taught at Edmonds College for more than 30 years. He founded Rincon Cultural, a local publishing house, and released a series of publications, including Salsa informant, Nuestra Musicaand Latin entertainment guide. He also edited and published Labrador, Cuentas, Every day is a picnicand A taste of Latin America. He owned La Copla, a Latin music store in the university district. Additionally, he produced two Salsa radio shows at KFOX 1250 AM, Salsa Esquina from Seattle, and Latin son. He also led two local salsa groups. 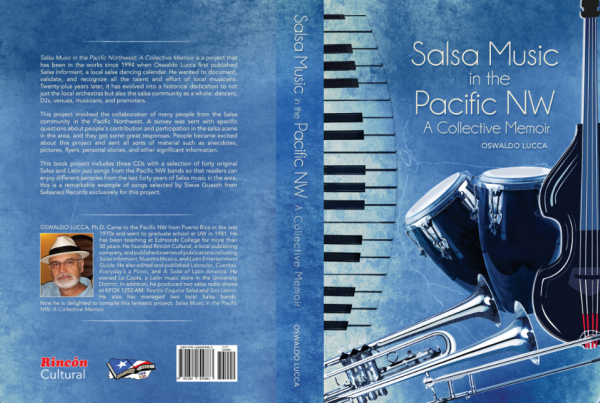