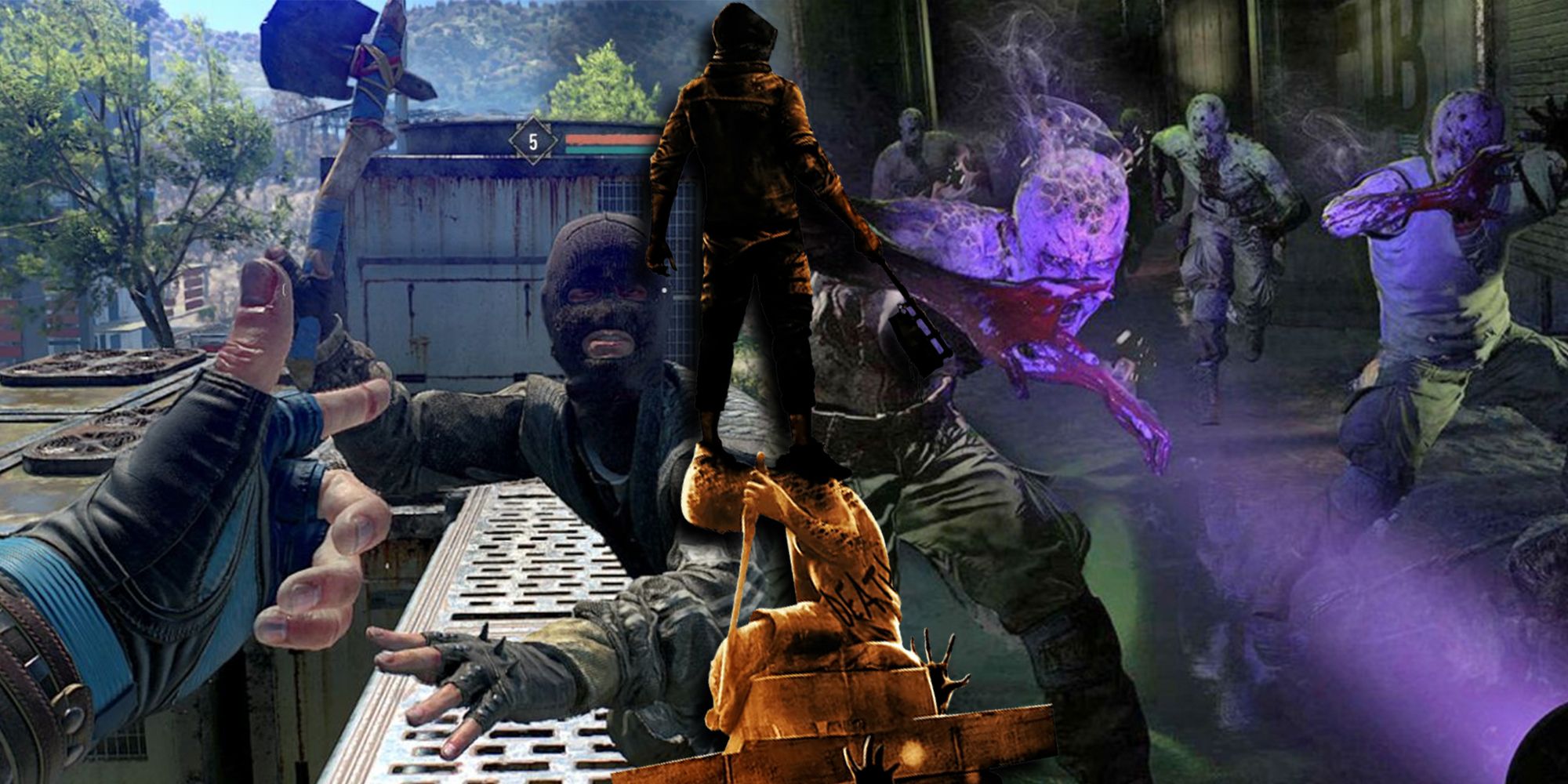 Dying Light 2: Stay Human has an absolute abundance of content to explore, experience, and discover. Frankly, Techland’s bold claim of “500 hours of content” may be more than accurate. Whether it’s Parkour Challenges, hunting down all Inhibitors, or even fighting random Infected on the streets, players need to be careful at all times.

It is exactly because of this that there are also a lot of interesting items, side quests and systems that players have missed. So, now let’s review some of the greatest examples.

Now, there are already a ton of guides detailing exactly how to reach the Developer Room near the VNC Tower in DL2. Frankly, many of you exploration-loving players have probably stumbled across the building on your own, though figuring out how to open it may have taken some work. And, while it’s not really hard to get gloVa’s left finger, it’s easy to miss. But, what’s even easier to miss is that Korek Charm Blueprint players can also get into the lobby of this dev area.

RELATED: Dying Light 2: All The Ways It’s Better Than The Original

Don’t forget to get this blueprint, because the Korek charm literally gives Aiden infinite durability on his weapons from then on. To do this, all players have to do is equip the Korek Charm on any weapon, and its durability is immediately recharged. However, due to how absolutely broken this is, it might be best to wait until after beating the game to get it.

7 The effects of raindrops on the camera

Moving on to a subtle system from Dying Light 2, this one has to do with the weather in Old Villedor. At first it never seems to rain, but once players get to the center loop it starts to happen a lot more often. And, one neat little system you may or may not notice during the rain is that Aiden can have raindrops on his eyes (or visor/face shield, depending on what’s equipped). When you look even slightly upwards, raindrops land on the camera and blur Aiden’s vision a bit while he’s there, like water would. But, if players look down, those spots start to disappear as if the raindrops are sliding down.

It’s such a small detail, but one that still adds to the overall experience, as evidenced by the number of us who still remember Metroid Prime games using a similar raindrop system, even though those games have about twenty years at this point.

This next system is by far the coolest thing in the game, bar none. It’s no understatement to say that the gaming community as a whole are big fans of when the developers manage to blend music and gameplay masterfully. Whether it’s music reacting to player actions, music that swells at certain points in a fight (rising energy, lyrics, etc.) or any other tactic, it always serves to improve the product in his outfit.

Well, Dying Light 2 does that in a way that’s integral to its core gameplay loop of Parkouring through Old Villedor. Basically, the music fits Aiden’s Parkour anytime. He becomes more energetic when he maintains a series of different Parkour actions without a break, he “crashes” every time he takes a big leap in the air, and he is often choked inside or under the water. It’s subtle enough that you could spend over twenty hours in the game without noticing it, but once you do it will add to every chase from that point on.

5 Fall while forcing a dodge

While all the features so far have been purely positive additions to the core gameplay of DL2, the next one is a feature that’s more of a punishment. Basically, during the fight, almost everything Aiden does takes a portion of his stamina bar. Whether it’s jumping, swinging his weapon, or blocking, it all makes Aiden more “out of breath” during a fight. And, if you keep dodging without paying attention to your remaining stamina, then Aiden ends up tripping and falling.

Makes sense, if you’re too weak to move, of course trying to get out of the way will cause you to fall, but damn it’s a death sentence in the midst of a swarm of infected.

4 The campfire and the funeral processions

For anyone who just loves running around Old Villedor, chances are you’ve come across those campfires that have an open book icon on the map. In terms of gameplay, all of these areas allow Aiden to sit down and recover his health. But, gameplay aside, it’s these great little places where you can just sit and listen to NPCs telling folk stories and legends of their time in the apocalypse.

And, it’s not just limited to campfires either, it’s also possible that Aiden will encounter funeral services, puppet shows, or even peacekeepers arresting survivors trying to get out.

This next one is incredibly easy to miss if you’re not paying close attention, but it’s one of the coolest little details Techland includes. One of the new mechanics in Dying Light 2: Stay Human is the “Immunity” system. This is a gauge followed by the canonical item, the Biomarker, a wristband that tells a Survivor how close they are to spinning if not soon exposed to UV light. Apparently, the amount of UV light an infected person receives also impacts their course. Mechanically, it’s just a timer that kills you if you can’t get to a UV zone in time while walking around at night.

But the thing is, Aiden not only acts more frantically as time goes on, he also starts to look more like a “zombie.” Every swipe of his weapon, the noise he makes while climbing, and even the simple act of breathing while standing still feels a lot more rabid and animalistic than when your immunity is topped off, which makes sense, given the origins of the virus in Dying. Light 2 .

2 The photo of the night hunter in Gazi’s room

Much like the developer room in the skyscraper, the secret room full of drawings by Gazi, a beloved NPC from the first Dying Light, has long since been discovered by most dedicated fans. This hanging storage container is covered from wall to roof with adorable drawings/artwork depicting how much Gazi loves Kyle Crane, the playable character from Dying Light 1. But what most people seemed to miss, however, is that there is an image that stands out. On one of the walls full of Crane images, there’s also a photo of the Night Hunter from DL1’s “Be The Zombie” multiplayer mode.

Now, normally this would look like an unrelated photo, but since there’s been a long-standing fan theory that the Night Hunter is actually Kyle Crane after the following DLC’s volatile ending, it’s actually most likely with a nod to the fans. .

1 Zombies don’t care about flashlights… but humans do

Finally, let’s talk about one last immersive system that we’re sure hardly anyone noticed. So, one of Aiden’s most useful gadgets in the entire game has to be the flashlight. Not the UV flashlight, although that’s also incredibly useful, just the standard flashlight. Without it, running at night would be nearly impossible and exploring Dark Hollows would be an insurmountable nightmare.

But have you noticed that those idle Infected in those Dark Hollows you’re constantly using Takedowns on don’t seem to care about the flashlight at all? That’s right, the flashlight has no impact on stealth when it comes to infected. Honestly, no matter how big the horde, the infected don’t seem to care if Aiden shines the light in their eyes. But this rule does not apply to human enemies like Renegades, Bandits, or even Peacekeepers. In fact, they almost immediately go from “unconscious” to “fully alert” as soon as the light from the flashlight hits them.

NEXT: Games To Play If You Like Dying Light 2

The new customization tools are neat, but we need a lot more than neat at this point

Jacob Buchalter is an Arizona-based writer and gaming enthusiast. He’s the type to be irrationally obsessed with anything gaming, animation, art, manga, and anime. And while he’s not the argumentative type, he’s certainly stubborn about stupid details in shows and games from over 5 years ago.