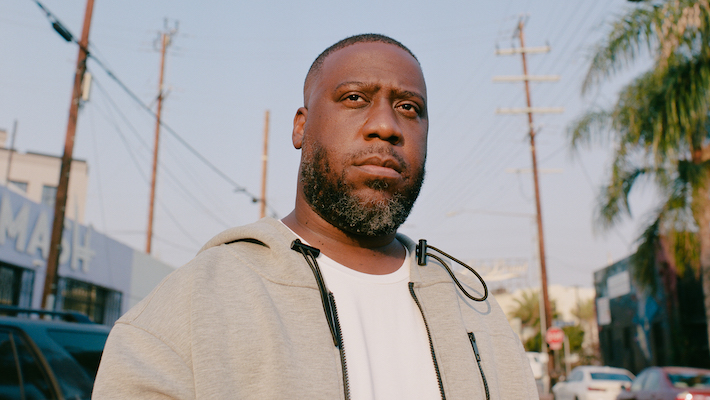 Robert Glasper does it all these days. He has just completed a European tour in support of his latest album, Black Radio III, performed at the Montreal Jazz Festival earlier this month (where he received the prestigious Miles Davis Award), and is scoring not one, but three television and film projects. But the biggest and most personal endeavor of all for the four-time Grammy Award-winning pianist, producer and composer is the first Blue Note Jazz Festival in Napa, California.

Going down to Charles Krug Winery from July 29-31, Glasper is the artist-in-residence and curator of the festival. The lineup is an eclectic representation of the inextricable links between jazz, hip-hop and R&B. Where Chaka Khan, Maxwell and Black Star play rare headliners, the lineup is equally stunning for creative collaboration performances like Snoop Dogg with Dinner Party (Glasper, Kamasi Washington and Terrace Martin), The Soul Rebels with GZA & Talib Kweli and Glasper alongside Erykah Badu, BJ The Chicago Kid, Ledisi and D Smoke – oh, and Dave Chappelle is also hosting the weekend.

We caught up with Glasper by phone to talk about the vision behind the festival, how Miles Davis’ legacy inspired him, and how his career sees him charting the evolution of black music in incredible ways.

This interview has been lightly edited for length and clarity.

AS: You have just returned from Europe and I saw you for the first time on tour at the Montreal Jazz Festival a few weeks ago. Given your work on the Everything is beautiful tribute album in a way to Miles Davis, and marking miles aheadhow does it feel to be honored with the Miles Davis Award as someone who pushes jazz music into new areas like Miles did?

It’s so funny how Miles Davis appears in my life. Miles Davis is the first jazz musician I ever heard covering pop songs. I was in college and got this record miles around the world where he covered “Human Nature” by Michael Jackson and he also covered “Time After Time” by Cyndi Lauper. It opened my eyes a lot. It’s part of the thread of who I am in just being open and modern and not forgetting history, but not being held back by history. And then you fast forward and Don Cheadle asked me to score the Miles Davis movie he did, miles ahead, and it was the first thing I ever scored. Then in the middle of the music, Sony hit me up and asked me to produce a Miles Davis record because it was going to be his 90th birthday. So they asked me to do this remix and I told them I would love to, but I explained to them how I wanted to do it: I can’t put hip-hop drums under a muted trumpet and call it a day. I really wanted to dive. That’s why it’s [Everything’s Beautiful] also one of my favorite projects too, because of the way i did it and the way i captured more miles than his trumpet. I think he’s on two songs on the whole album as far as the trumpet goes. Because the other stuff, I literally have his breath linked to the bass drum of a song, I make him talk, clap, whistle. I try to get the elements of the whole person. You can’t reduce it to just the trumpet. While I received this award, it fell into place that with Miles, he is who he is, but that’s why jazz started to be so open initially. He is a pioneer.

He always sought to blur the definition of jazz, which is kind of what you’re pushing now.

Exactly, it was such an honor and I’ve been playing at the Montreal Jazz Festival for years, so it was an honor to have that. It was also the heaviest award I have ever received [laughs] I may have been knocked over by the trophy, it’s so heavy.

Oh yeah, I saw that thing, it was as big as your chest!

And since it was the first day of my tour, I was gone for three weeks, so I had to ask them to mail it to me.

Well, speaking of festivals, you soon have the Blue Note Jazz Festival in Napa. I think it really speaks to an incredible collaboration between jazz, hip-hop and R&B artists. What was the vision behind how you organized this and put it all together?

The idea literally came from my residency at the Blue Note [in New York] every October. I’ve done it three times so far and last October Steve [Bensusan] and alex [Kurland] from Blue Note, the owner and booker, came up to me and started talking about doing something outside of residency, maybe doing a festival. They approached me and I was like, “That makes total sense in the world.” We kept talking about it here and there, and then literally last April, we pulled the trigger and said, “Let’s actually do this and make this happen.” The festival is cool because it feels like a family reunion. Everyone who performs at the festival, I know them. I kind of have to choose my own fucking festival. It doesn’t get any better than that. They are all incredible artists and I have to select and put them together. It’s not a typical thing that an artist or a musician can do.

Yeah, and for the higher-profile collab sets like Dinner Party and Snoop, there’s also one like Amber de Moonchild and Kiefer. Like, where the hell can I see this?

Yeah, Amber’s my homie ’cause she been on my R+R=Now registration. We are all friends. And really, it’s like a pickup game. Like when Michael Jordan did it space jam and he was able to invite all his NBA basketball friends to play with him while he recorded the film. It’s like my space jam [laughs]

It definitely looks like a version of your residence on steroids.

For sure. That’s literally where the idea sprang from. We even started with guests that we had already had in the residence and others that we wanted to have. I think it started with me making a list of people I wanted in my next residency, and then I was like, “We should do a festival and have all of these people.”

Something that struck me in Montreal and now watching the lineup for this festival, then watching black radio — Black Radio III specifically – is you’re really trying to tell the story of how black music has evolved and where everything is now. Talk a bit about it and how it all relates to the artists you’ve played at that festival that has your name on top.

A lot of people put jazz in that exclusivity box. Where it’s that exclusive thing that doesn’t fuck with anyone else, any other genre. And that’s just not the case. In its design, it is already crazy. Jazz mixes with classical music, blues, gospel… And later, when you listen to certain jazz standards, they weren’t even standards, they were show tunes. They were songs that people took from musicals. Like “My Favorite Things” or “All The Things You Are,” those important jazz standards, they weren’t jazz tunes. They were jazz artists who looked to the world and brought things of the world into the music, and then they became standards. That’s kind of where I come from. Black music is a big house and it has many genres under that roof, blues, gospel, jazz, hip-hop, R&B, etc. I like to go from room to room in this great house of black music. Like I had a key to it all, because it’s in my DNA. I’ve studied this music, I’ve toured with some of the greats in every genre, so I feel like I’m one of the people who can represent this thing we call black music. There are so many amazing artists and pioneers, and to have them all in one festival is so much and represents how free music can be.

I find it hard to think if I’ve ever seen a festival lineup like this. What are your hopes for this weekend?

I hope it becomes an annual thing. But also, with the kind of musicians and artists that we have, it probably lends itself to a lot of things that we haven’t seen before. People sitting with other people, cross-pollinating on stage. Most of the time on the festival stage, you go see this artist and that’s what you see, that’s the festival. But this one will be more pollinating, with a family atmosphere. It’s purposely smaller than most festivals. We try to mirror the Blue Note residence, so we wanted to keep it intimate (in festival terms) and try to emulate that feeling you get when you’re in a small club; like the residence, with unexpected pop-up guests. I get all kinds of calls from all kinds of artists about this. I’m really looking forward to it.