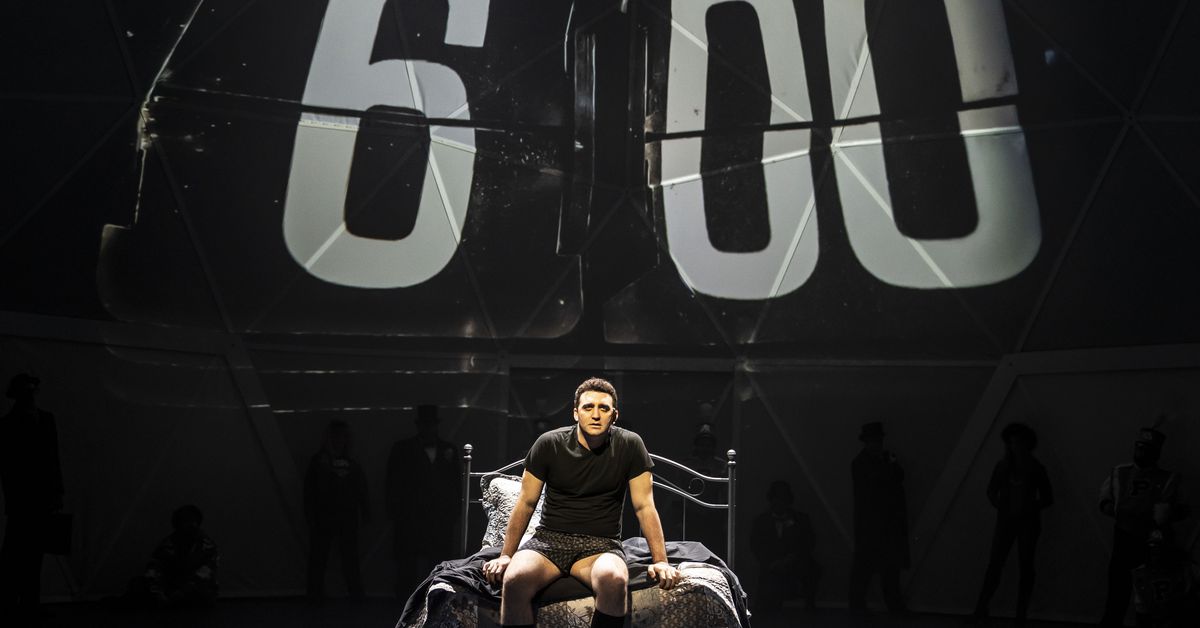 The book is repetitive, even for a show about an issue in the space-time continuum. The score is forgettable, even if there’s a full fanfare involved. And while the story closely follows the beloved 1993 film that inspired it, Paramount Theater’s production of “Groundhog Day: The Musical” just doesn’t capture the original’s irresistible charm.

The problem with the production, through March 13 at the Aurora Theater, isn’t the casting. Director Jim Corti pulled out all the stops to direct the seven-time Tony Award-nominated show. The setting is skillfully cinematic. Paramount’s robust live orchestra fills the former vaudeville palace with rich, complex sound. And Corti’s 29-person cast delivers some of the most beautifully blended ensemble vocals you’re likely to hear on stage this year.


But still, somewhere between the screen and the stage, something about “Groundhog Day: The Musical” got lost in translation. Danny Rubin’s book (Rubin also co-wrote the screenplay with the late Harold Ramis, the film’s director) and Tim Minchin’s music and lyrics often sound hollow and heartless.

The main issue concerns anti-hero Phil Connors (aka Bill Murray’s role in the film), a cynical weatherman (played here by Alex Syiek) assigned to cover the elaborate Groundhog Day festivities in little Punxsutawney. In his suitably smug delivery, Phil’s derision for the townspeople is so thick you could almost slash it with a knife. He recoils with the horror of a city dweller before the decor of the picturesque bed and breakfast where he is staying. He pokes fun at the parade featuring the Marching Chucks band, speeches by local dignitaries and especially the seven-foot groundhog mascot that seems to be ubiquitous in Punxsutawney. When he’s not giggling, Phil hits his producer Rita (Phoebe González), who somehow refrains from hitting him.

After a day of smiling at the people of the province and broadcasting the groundhog’s emergence from its burrow, Phil wakes up the next morning to find that it’s Groundhog Day again. And even. And even. Same Punxsutawney show, same boring mascot, same overexcited locals, same cutesy B&B. When Phil realizes he’s stuck reliving February 2 endlessly, he first embraces hedonism, confident in the knowledge that no matter what he does, he’ll end up in bed. But as Groundhog Days pile on, hedonism gives way to despair, which in turn gives way to something like hope for Phil, hope born of compassion and regained self-awareness.

Unfortunately, the musical gives Phil two working modes: Apex narcissist or Albert Schweitzer. There are no levels in between, which makes Phil’s evolution seem more like a plot than a deserved, believable redemption.

In the key role of producer Rita Hanson, González lights up the stage as a driven, talented boss with a sunny outlook and the authoritative demeanor of someone who knows he’s in charge and good at it. what he does. Hanson’s power increases every time Phil acts like a jerk.

The musical makes careful reference to the secondary characters of the film. Kyle Adams twists the comedy and pathos of Ned Ryerson, a charming insurance salesman who faces his own inner darkness. Haley Jane Schafer’s Nancy Taylor tugs at the heartstrings in “Playing Nancy,” a plea to be seen as more than a pretty face.

The musical is superb throughout. Set designer Courtney O’Neill encased the cast in a cross between a gigantic snow globe and a geodesic dome. It’s gorgeous, and allows projection designer Mike Tutaj’s various winter wonderland scenarios (and hilarious imagery of the massive groundhog) to unfold.

“Groundhog Day” is at its best when the entire ensemble is at full vocals, their voices blending with “One Day” and “Seeing You” like seamless silk under the direction of Music Director/Bandleader Kory Danielson.

On screen or on stage, “Groundhog Day” has always been more than a hiccuping wrinkle in time. It’s about feeling stuck. It’s about the challenges that come with taking a close look at one’s ugliest features. It’s about getting unstuck, whether it’s because of a destructive romantic pattern or a negative feedback loop. But when you can’t believe meteorologist Phil Connors’ journey, the power of “Groundhog Day” is completely eclipsed.