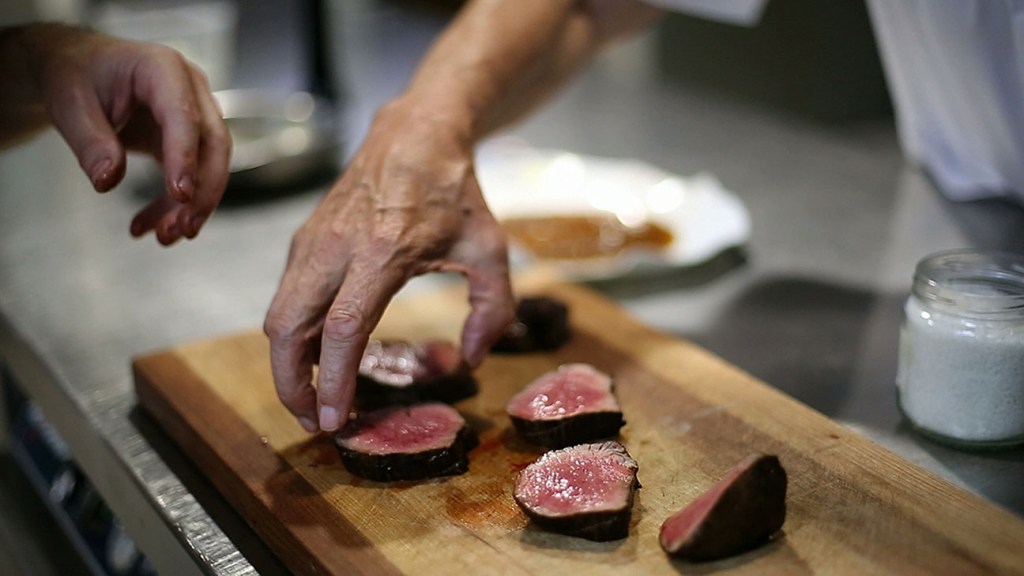 There are certainly more meritorious efforts than traveling the world in search of the perfect cut of meat, but the French producer-director Franck Ribiere nonetheless delivers a captivating, and often instructive, quest for the world’s largest sirloin in his comprehensive gastronomic documentary, Steak (R) evolution. Filled with enough of the sizzling, mouth-watering chunks of beef to drool carnivores in their seats and gag herbivores to exits, this shameless investigation of flesh-eaters reveals what it takes – from ranch to butcher’s block to grill – to turn one of the simplest of meals into a true art form, no condiment required.

Yet this captivating and somewhat overly long 130-minute talk also raises questions about mass food production and how man and nature interact on the plate, resulting in a conclusion that might even appeal to people. like Jonathan Safran Foer: Eating animals is no laughing matter, and the best steaks on the planet are often the results of the most humane farming techniques.

The “(r) evolution” of the film’s title began when the director, whose family raised Charolais cows in eastern France, traveled to New York and had a revelation when he tried the famous porter at Pierre Luger in Williamsburg. Not only was it better than anything he had ever eaten at home, but the restaurant’s cooking technique (they grill it twice) didn’t explain it all: it had to be the meat.

It makes Ribière travel, accompanied by an excellent Parisian butcher Yves-Marie Le Bourdonnec, to find out who and how they make the best steaks in the world. Ranking a steakhouse in the Top 10 as they travel from the Pampas of Argentina to the land of Angus in Scotland to the legendary Kobe beef ranches in Japan (where, in order to get the perfect marbling, the cows are hand-mixed grain fed, massaged with Saki and caressed by Mozart’s music), the filmmakers feature a group of very committed farmers and chefs who treat their cattle with great care and whose concern for quality rather than quantity ultimately translates into the end product.

As the two Frenchies travel the globe, it becomes a sad reality that their homeland, well known for its long-standing traditions of haute cuisine, is generally behind in terms of producing delicious beef, although it remains a nation of big meat eaters. (When Burger King reopened in Paris last December after a 16-year hiatus, queues wound up around the block.) On the other hand, newer establishments like Fleisher’s Pasture-Raised Meats in Brooklyn or the iWagyu livestock farm in Sweden are leading the way in a real revolution that will likely change the way we eat meat in the future.

While Steak provides a comprehensive portrait of these various high-end ranches and restaurants, it conspicuously leaves out the slaughterhouse – usually an important part of any documentary that touches on the meat-making process. It’s certainly a bit of an evasion, especially since Ribière and his production company, La Fabrique de Films, are behind some of the bloodiest French films in recent memory, notably Alexandre bustillo and Julien maury‘s extreme ketchup-fest, Inside.

But the missing elephant (or cattle) in the room doesn’t detract from the movie’s underlying message, which – despite a long run that could probably use a more efficient cut, uh, – is still made passionately clear when l team arrives. to their final destination: a place where man and meat seem to live in perfect harmony. This is until one eventually slices the other, sprinkle with salt and cook it over a slow-burning fire. You’ll never look at this sirloin the same way again.