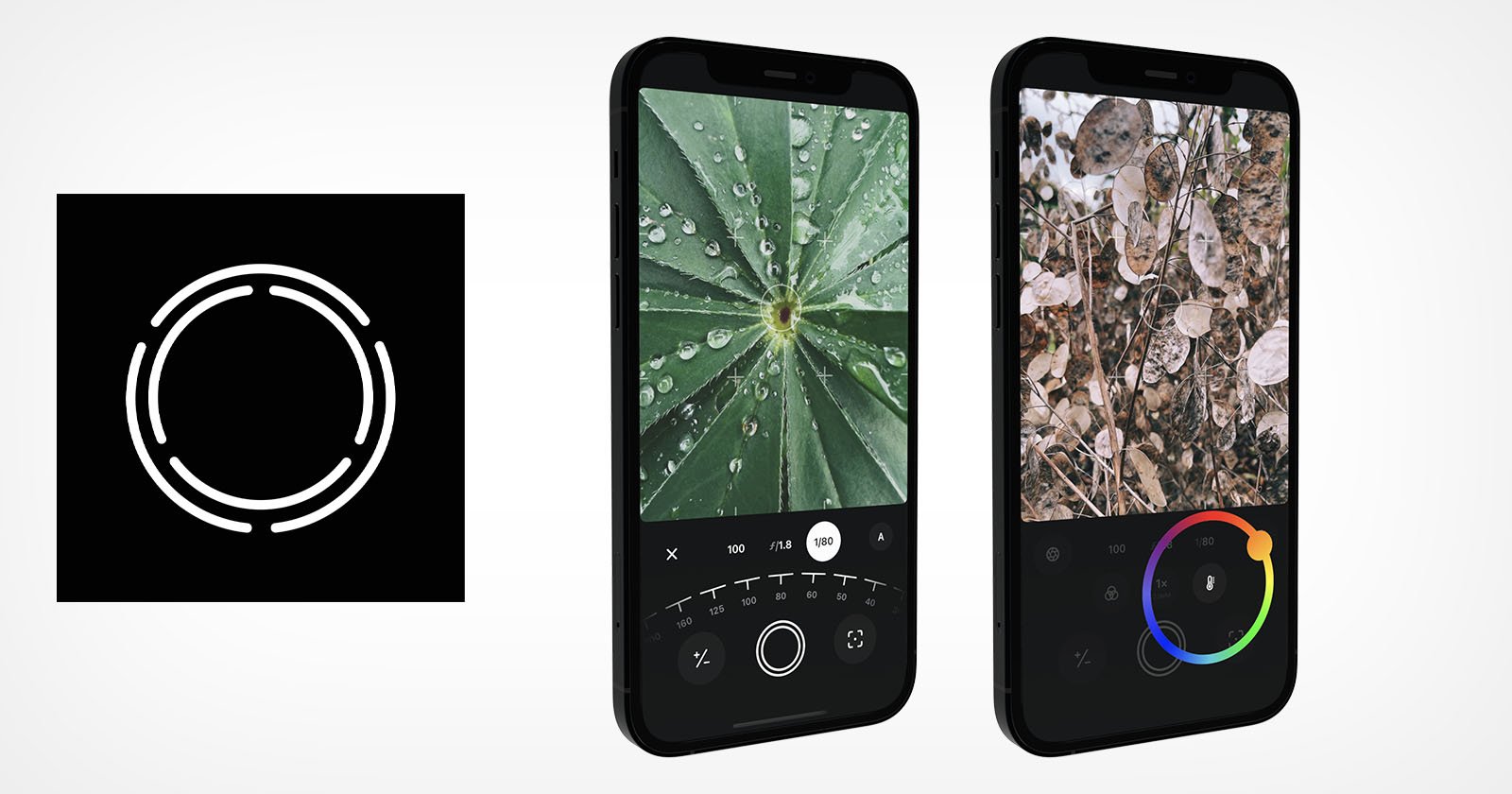 Obscura was originally launched in 2015 and Obscura 2 was released in 2018 and has been downloaded over a million times.

The app’s third iteration focuses on adding more powerful features while making them more enjoyable to use. App creator Ben McCarthy says it offers a wide range of camera features, but packs them into a simple, well-designed control scheme that anyone can master with a balance of aesthetics, usability and intuitiveness. All camera controls are accessible with a single thumb, and gestures and haptics combine to create a tactile experience that helps photographers stay focused on their subjects. 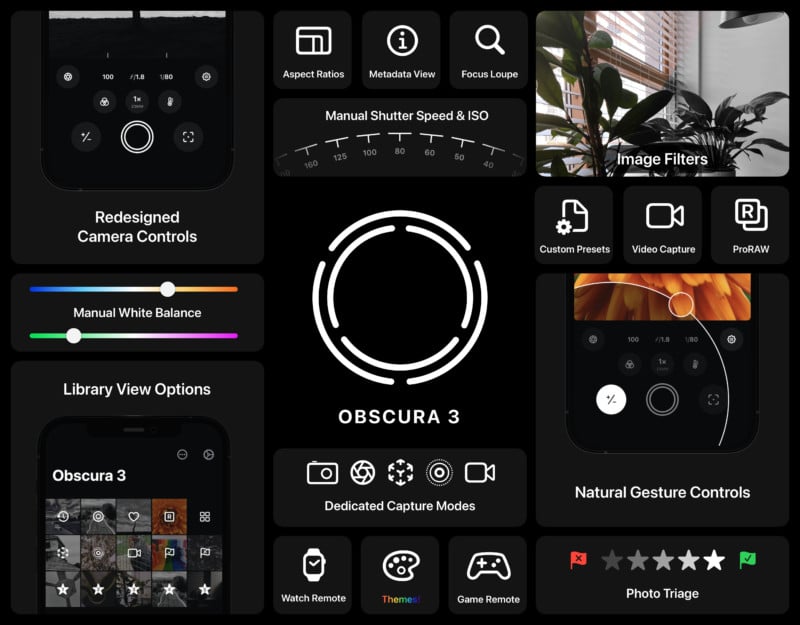 Photo mode is designed to be fast and uses the Virtual Camera (the dual or triple camera system), which allows rapid zooming between lenses in a compromise that excludes features such as manual focus, white balance, shutter speed or ISO.

Pro Photo mode is the default and is described as the evolution of Obscura 2’s interface. It only uses one camera at a time, allowing manual focus control , white balance, shutter speed and ISO. It also allows RAW and ProRAW capture on supported devices. 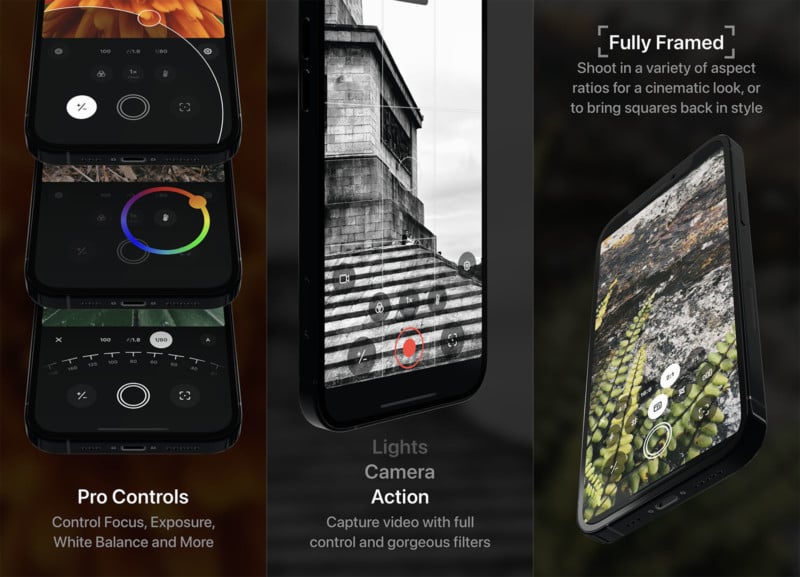 Depth mode captures portrait photos (or any photo with depth data) using the same format as Apple’s camera app, so the effect can be changed using the tools editing from the Photos app.

Live Photo is very similar to Photo MODE, but only for Live Photos. The aspect ratio cannot be changed in this mode.

Video mode separates video functionality so other modes don’t get too complicated or convoluted. This mode also uses the cameras individually and allows manual focus and white balance. 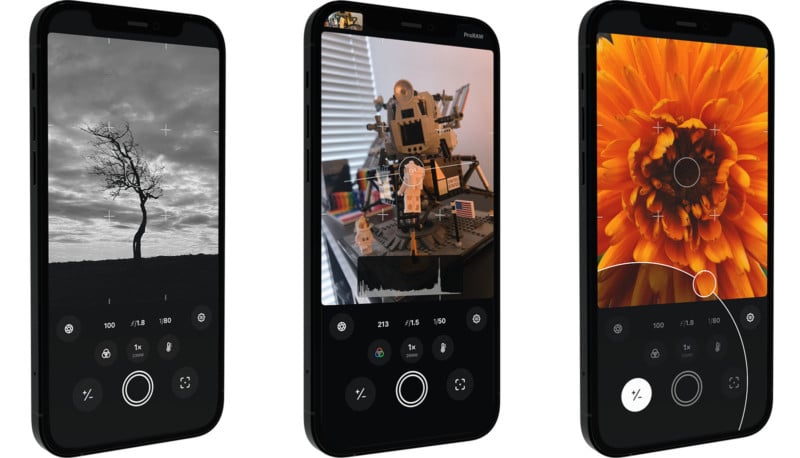 “Obscura 2 was too dependent on the control wheel and lacked hierarchy,” says McCarthy. “We wanted it to be much more explicit that certain features would prevent others from working. It needed to be more flexible to accommodate different camera modes and their different functionality. It needed to work not just on a flat bottom, but also when overlaid on the viewfinder, to support video and alternate image formats.It should be easier to learn, without sacrificing speed and usefulness for professional users.

“I’ll let our users be the final judge, but I think we’ve done a good job of evolving the design without losing the Obscura feel.”

Many controls are more easily accessible and changeable without requiring multiple presses, including exposure and focus. Obscura 3 has much more robust white balance controls that not only allow for presets but also manual temperature and tint adjustment, and a gesture shortcut to quickly adjust temperature and tint by gesture.

McCarthy says there are many more features incorporated into the “Camera Settings” button, which includes primary and secondary photo formats (which can be set independently), histogram (now in two sizes and can display a color or a monochrome histogram), spirit level, grid, flash and other image formats.

McCarthy said one of his biggest personal gripes with Obscura 2 was that the library interface never supported landscape orientation. This has been settled.

“Library view is no longer just a list of your photos, instead we show a small number of recent photos and quick access to important photo albums, like favorites and RAW photos. And by not recovering any data on thousands of photos at once, performance is dramatically improved,” says McCarthy. 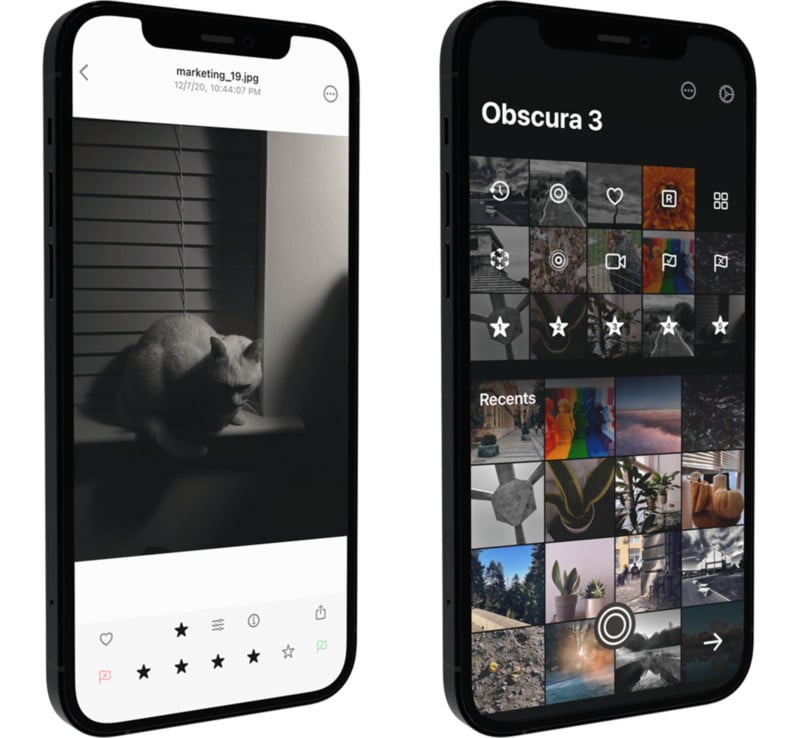 Obscura’s image viewer is also completely overhauled with a new Triage view that includes a rating system for photos (stars or flags) and a new filter selector in editing. More editing features are also promised for the future.

Obscura 3 comes with an Apple Watch companion app and game controller support (photographers can take photos with a controller attached). Widgets will be added soon and iPad support is also coming.

The app is available for $10, which is double the Obsura 2 price of $5. McCarthy says the price increase is due to significant improvements over the previous app, as noted above. It is available for download on the App Store.