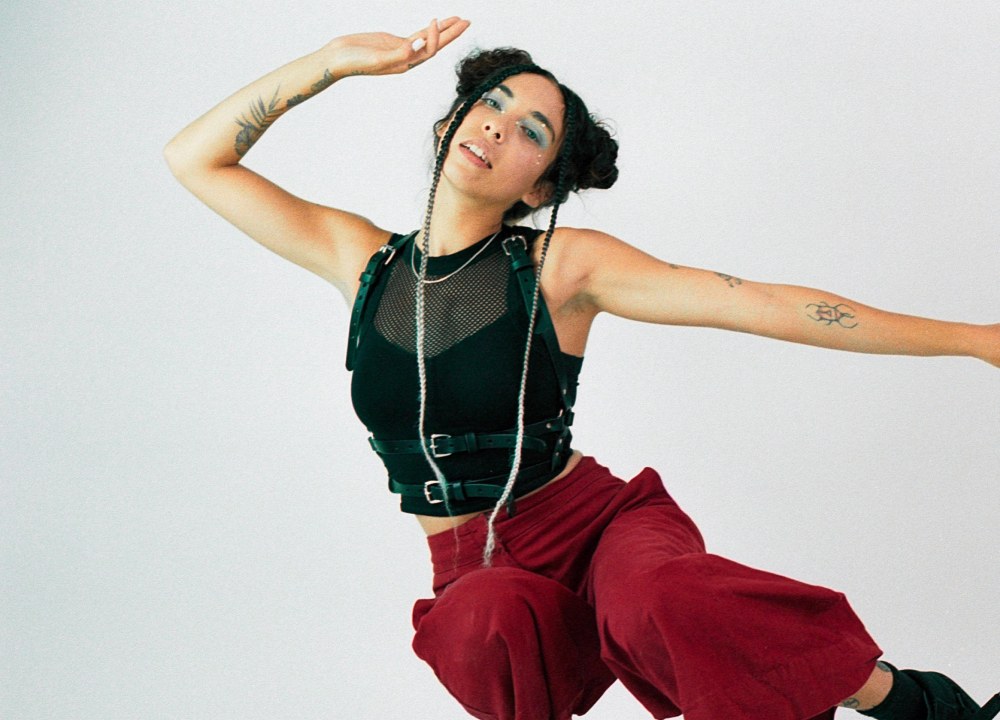 Although widely known for her cathartic brand of indie rock, singer-songwriter Indigo De Souza’s first foray into music came with bluegrass. Hailing from a small town in North Carolina, a Saddle Creek Records artist performing at this year’s Maha Music Festival began learning guitar at the age of nine from a local country artist. From there, her mother would often drop Indigo off picking porches around Spruce Pine, their town of nearly 2,600 about an hour from Asheville, to play music with “the elders.”

As a teenager, De Souza began recording and releasing music on her own. She self-released ‘I Love My Mom’ in 2018 when she was 21 before releasing ‘Any Shape You Take’ in August 2021 with Saddle Creek – and she’s been touring ever since. The Maha Music Festival is one of 24 shows that will conclude its international tour.

The Reader sat down with De Souza to discuss her recent tour, her upcoming third album, as well as what Maha’s audiences can expect from her July 29 performance.

TR: When did you first realize you wanted to make music? Was there ever a turning point when you realized that was what you wanted to do?

ID: Ever since I was little, before knowing what trades were, I already wanted to play music and I knew that was what filled me the most. I was nine years old when I started playing guitar. I was learning from a country musician and bluegrass artist in Spruce Pine, North Carolina. I used to sing before that and I have always sung. So that was a turning point. When everyone was starting to look into colleges and trying to decide what their path was, I didn’t want to go to college and I hated school. I really loved playing music. So I made the decision to do what I was passionate about and I trust that it would sustain me if I dedicated myself to it.

TR: How did you get signed to Saddle Creek Records here in Omaha?

ID: It was kind of a snowball of people in the industry believing in me. I first met people in Asheville who knew the industry and worked in it in one way or another. They took me under their wing[s]. Thanks to them, I met more people who did the same thing and then thanks to them, I ended up working with a manager and then with a booking agent. I then ended up shopping around for my stuff and trying to be really mindful and intentional about the steps I was taking so that I didn’t end up in a bad spot like I know a lot of people do with labels. I spent a lot of time sifting through a lot of different offers and trying to figure out what the people on each label were like. What was their intention with the music and with me and if they saw me as a person and not just as a sign of money. Saddle Creek was the most human, artist-friendly label I talked to. They ended up being the ones I felt most connected to.

TR: Regarding your two albums “I Love My Mom” and “Any Shape You Take” released by Saddle Creek, what do you think is the most substantial difference between the two? What was the musical evolution from your first album to the second?

ID: There are two types of evolution. There is sound evolution. They sound very different because I had different resources. For the new album, I had a lot more sounds to use and spaces and brains. It’s also just different [because] I was much younger when I did “I Love My Mom”. I was still a teenager when I was writing all the songs. “Any Shape You Take” came in my early 20s. And the album I just recorded is so different from those two. It makes sense. It seems like a silly thing to say out loud, but just growing up and learning a lot about myself affects the music. The music changes with me.

TR: Speaking of this third album, when do you plan to release it?

ID: It will be next year because the production takes so long.

TR: Do you have a favorite song from your two albums? Are there any songs that you are particularly attached to and that you like to play?

ID: Not so much because I overplayed everything. I’ve been touring for almost a year now. I’m so exhausted that the songs hardly sound like anything anymore. But I always find a way to connect with them when playing, mostly because of the crowds. Like when the crowd is really engaged and nice and really listening, it makes me feel like I’m in an experience with the crowd. If I had to pick one, I’d probably say “Real Pain” is my favorite to play and hear because it’s just the most soulful song, and it’s easier to connect with it when I’m playing in live. It’s always nice to engage with the public, [especially] for the shouting section. It’s also really fun for me to play because I don’t have to play guitar.

TR: Since you’ve been on tour for so long, how do you maintain your voice and overall energy when playing?

ID: This year, I learned a lot about my limits and realized that I needed to get more involved in booking and planning tours. Now I realize that I need more space between rounds. This year I did a lot of coming home for a week and then leaving again, and so I couldn’t really anchor myself at home, which I think is really important for performance in general, to be able to find my center again before I leave. It’s so important to recharge at home. To cope, I definitely started getting my own hotel room this year. Only time, space, having limits, taking care of myself and eating well.

TR: What is your creative process? How do you start writing a song?

ID: It’s different every time. Sometimes it starts with the melody or sometimes it starts with the words. It always comes from this heightened space of emotion and kind of an outpouring of everything I feel. It’s really hard to write music and be creative when you’re touring so much. So I’ve actually written fewer songs this year than I’ve ever written because I’ve been so busy and so tired. I didn’t really have the energy or feel connected to myself enough to write new material. This touring cycle is almost over and it will be really important because I will have about five months of rest to find this place.

TR: How is it to play Maha with all these other artists?

ID: I’m sure it will be like other festivals that have been really enjoyable this year. I enjoyed meeting other artists and talking to them about touring and their performances. It’s nice to be around other artists and create a support system. It’s something you wouldn’t understand unless it was your job. It’s such an intense thing. It’s always great to connect with other people who know what it’s like to be so deep in the music industry. And I also love watching other people’s sets. It’s always very inspiring to see what other people choose to do at festivals and what their production looks like. I remember being very young, seeing shows and thinking that I could never break into this community. It’s like a dream to be at the center of it all and to learn from all these people around me.

TR: What will your set look like? Will you be playing a mix of songs from “I Love My Mom” ​​and “Any Shape You Take”?

ID: Yes, that’s normally what we do. We toured so much that we didn’t have time to rehearse new songs from the new album because we’re never home.